Jazz Music for All Occasions

Check out my latest music and upcoming events... 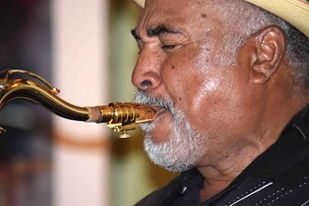 Jazz for all occasions

Ron’s early years were filled with the great  R&B singers and groups of his day.

“I remember listening to Sam Cooke, Jackie Wilson and all of the Motown stars like the Temptations, Four Tops, Smokey Robinson & The Miracles and Jr Walker and The All Stars plus James Brown and Maceo Parker”!

Ron received inspiration from his family as his sister Barbara (Bobbie) sang in the church choir and his mother would sing hymns daily around the house. “When I say hymns, I mean the slow meter hymns that were sung during the time of slavery”.

With a solid background in R&B and sprinkles of gospel,  Ron went on to college to major in music at U.C Davis. He graduated with a B.A. in music and followed up with a teaching credential from Sonoma State University 1978.

With his teaching credential in tow Ron taught music in the public-school system for 10 years, while leading a jazz band that played in Vallejo and the surrounding cities including

It was at this time that he fell in love with jazz after hearing Gene Ammons. “I admired Gene”, whom he met and spoke with often when Gene played at the famed jazz club Keystone Korner in San Francisco. “I admired Gene Ammons because he had such a beautiful sound on the horn, especially the low notes, and he made everyone listening feel the music he was playing. Lastly, Gene was a wonderful person”!

Ron also admired and was inspired by other players like John Coltrane and Sonny Rollins for their technique, and Stanley Turrentine for his soulful bluesy style!  Additionally, Ron was really moved by Cannonball Adderley for his articulation, technique and sound!

There are other younger players that Ron Burris appreciates and draws inspiration from like Vincent Herring and Eric Alexander. “They both have a fresh sound; one can hear the influences of the masters’ on their playing while also hearing their own unique styles!” Also, on Ron’s favorite’s list of modern-day players is trumpet master and educator Wynton Marsalis and Kirk Whalum.

During his 30’s Ron left music and pursued other things. “One could say I had a spiritual awakening”. Ron went back to school and received a master’s degree in theology from Fuller Theological Seminary in 1991 and a PhD in church history in 2002 from the Graduate Theological Union in Berkeley CA.

However, being influenced by his mother and a noted Bay Area musician John Turk, Ron began playing music again with a passion. That passion culminates in a very cool fashion with the release of his debut self-produced CD, Mr. Cool!

A 9-tune set with 7 originals Mr. Cool display Ron’s excellent writing, arranging and production skills as well as his on defining sound, and playing tenor, alto and soprano saxophones his musical virtuosity!

Stay connected with Ron Burris and Mr. Cool at https://ronaldburrisjazz.com/

The original jazz standards by Saxophonist, Ronald Burris, will NOT disappoint!


The CD is available on line at:

Let me know what you think about the CD.

Sign up to hear about upcoming shows and events and/or to hire the band for your affair.